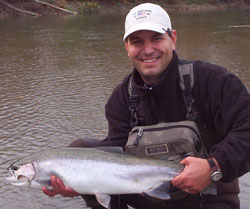 The biggest runs of steelhead in the spring especially in the Lake Erie streams will be in early March and will stop the first half of April. However in the larger streams such as the Cattaraugus in New York steelhead will run into the end of May. Often in the Catt the steelhead that are running in May are not spawning, but rather they are feeding on Lake Erie shiners that run upstream in May. Here are some areas of a stream or river that will hold steelhead and produce in the spring.

In conclusion, this is the time to start preparing for your steelhead trip by tying flies, preparing your gear, and planning your spring steelhead trips. Remember the water is often very cold in the early months of spring so stay warm and be safe